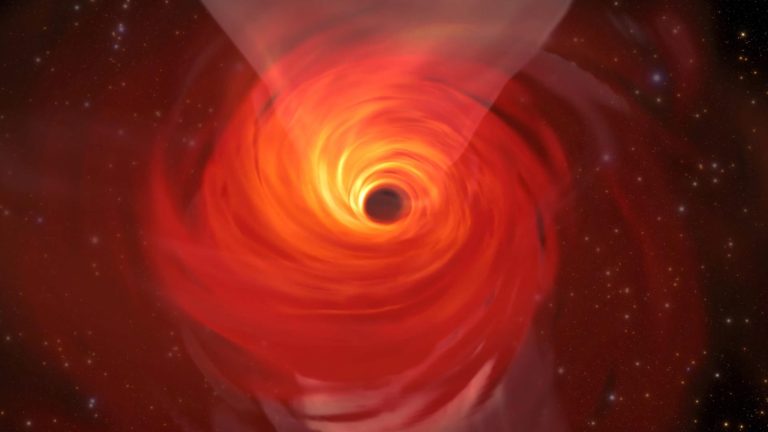 Astronomers have spotted signs of a “hot spot” orbiting Sagittarius A*. This is the black hole at the center of our galaxy.

Astronomers have spotted signs of a “hot spot” orbiting Sagittarius A*.[{” attribute=””>black hole at the center of our galaxy, using the Atacama Large Millimeter/submillimeter Array (ALMA). The finding helps us better understand the enigmatic and dynamic environment of our supermassive black hole.

“We think we’re looking at a hot bubble of gas zipping around Sagittarius A* on an orbit similar in size to that of the planet Mercury, but making a full loop in just around 70 minutes. This requires a mind-blowing velocity of about 30% of the speed of light!” says Maciek Wielgus of the Max Planck Institute for Radio Astronomy in Bonn, Germany. He led the study that was published today (September 22, 2022) in the journal Astronomy & Astrophysics.

This shows a still image of the supermassive black hole Sagittarius A*, as seen by the Event Horizon Collaboration (EHT), with an artist’s illustration indicating where the modeling of the ALMA data predicts the hot spot to be and its orbit around the black hole. Credit: EHT Collaboration, ESO/M. Kornmesser (Acknowledgment: M. Wielgus)

The observations were made with ALMA in the Chilean Andes, during a campaign by the Event Horizon Telescope (EHT) Collaboration to image black holes. ALMA is — a radio telescope co-owned by the European Southern Observatory (ESO). In April 2017 the EHT linked together eight existing radio telescopes worldwide, including ALMA, resulting in the recently released first-ever image of Sagittarius A*. To calibrate the EHT data, Wielgus and his colleagues, who are members of the EHT Collaboration, used ALMA data recorded simultaneously with the EHT observations of Sagittarius A*. To the research team’s surprise, there were more clues to the nature of the black hole hidden in the ALMA-only measurements.

Using ALMA, astronomers discovered hot bubbles of gas swirling around Sagittarius A*, the black hole at the center of the galaxy, at 30% the speed of light.

Coincidentally, some of the observations were made shortly after a burst or flare of X-ray energy was emitted from the galactic center.[{” attribute=””>NASA’s Chandra X-ray Observatory. These kinds of flares, previously observed with X-ray and infrared telescopes, are thought to be associated with so-called ‘hot spots’, hot gas bubbles that orbit very fast and close to the black hole.

“What is really new and interesting is that such flares were so far only clearly present in X-ray and infrared observations of Sagittarius A*. Here we see for the first time a very strong indication that orbiting hot spots are also present in radio observations,” says Wielgus, who is also affiliated with the Nicolaus Copernicus Astronomical Center, in Warsaw, Poland and the Black Hole Initiative at Harvard University, USA.

This video shows an animation of hot spots (hot gas bubbles) in the orbit of Sagittarius A*. This black hole has a mass four million times that of the Sun and resides at the center of the Sun.[{” attribute=””>Milky Way. While the black hole (center) has been directly imaged with the Event Horizon Telescope, the gas bubble represented around it has not: its orbit and velocity are inferred from both observations and models. The team who discovered evidence for this hot spot — using the Atacama Large Millimeter/submillimeter Array (ALMA), in which ESO is a partner — predicts the gas bubble orbits very close to the black hole, at a distance about five times larger than the black hole’s boundary or “event horizon.”

The astronomers behind the discovery also predict that the hot spot becomes dimmer and brighter as it goes around the black hole, as indicated in this animation. Additionally, they can infer that it takes 70 minutes for the gas bubble to complete an orbit, putting its velocity at an astonishing 30% of the speed of light.

“Perhaps these hot spots detected at infrared wavelengths are a manifestation of the same physical phenomenon: as infrared-emitting hot spots cool down, they become visible at longer wavelengths, like the ones observed by ALMA and the EHT,” adds Jesse Vos. He is a PhD student at Radboud University, the Netherlands, and was also involved in this study.

The flares were long thought to originate from magnetic interactions in the very hot gas orbiting very close to Sagittarius A*, and the new findings support this idea. “Now we find strong evidence for a magnetic origin of these flares and our observations give us a clue about the geometry of the process. The new data are extremely helpful for building a theoretical interpretation of these events,” says co-author Monika Moscibrodzka from Radboud University.

This is the first image of Sgr A*, the supermassive black hole at the center of our galaxy. It’s the first direct visual evidence of the presence of this black hole. It was captured by the Event Horizon Telescope (EHT), an array that linked together eight existing radio observatories across the planet to form a single “Earth-sized” virtual telescope. The telescope is named after the event horizon, the boundary of the black hole beyond which no light can escape. Credit: EHT Collaboration

ALMA allows astronomers to study polarized radio emission from Sagittarius A*, which can be used to unveil the black hole’s magnetic field. The team used these observations together with theoretical models to learn more about the formation of the hot spot and the environment it is embedded in, including the magnetic field around Sagittarius A*. Their research provides stronger constraints on the shape of this magnetic field than previous observations, helping astronomers uncover the nature of our black hole and its surroundings.

This image shows the Atacama Large Millimeter/submillimeter Array (ALMA) looking up at the Milky Way as well as the location of Sagittarius A*, the supermassive black hole at our galactic center. Highlighted in the box is the image of Sagittarius A* taken by the Event Horizon Telescope (EHT) Collaboration. Located in the Atacama Desert in Chile, ALMA is the most sensitive of all the observatories in the EHT array, and ESO is a co-owner of ALMA on behalf of its European Member States. Credit: ESO/José Francisco Salgado (josefrancisco.org), EHT Collaboration

The observations confirm some of the previous discoveries made by the GRAVITY instrument at ESO’s Very Large Telescope (VLT), which observes in the infrared. The data from GRAVITY and ALMA both suggest the flare originates in a clump of gas swirling around the black hole at about 30% of the speed of light in a clockwise direction in the sky, with the orbit of the hot spot being nearly face-on.

“In the future, we should be able to track hot spots across frequencies using coordinated multiwavelength observations with both GRAVITY and ALMA — the success of such an endeavor would be a true milestone for our understanding of the physics of flares in the Galactic center,” says Ivan Marti-Vidal of the University of València in Spain, co-author of the study.

Wide-field view of the center of the Milky Way. This visible light wide-field view shows the rich star clouds in the constellation of Sagittarius (the Archer) in the direction of the center of our Milky Way galaxy. The entire image is filled with vast numbers of stars — but far more remain hidden behind clouds of dust and are only revealed in infrared images. This view was created from photographs in red and blue light and forming part of the Digitized Sky Survey 2. The field of view is approximately 3.5 degrees x 3.6 degrees. Credit: ESO and Digitized Sky Survey 2. Acknowledgment: Davide De Martin and S. Guisard (www.eso.org/~sguisard)

The team is also hoping to be able to directly observe the orbiting gas clumps with the EHT, to probe ever closer to the black hole and learn more about it. “Hopefully, one day, we will be comfortable saying that we ‘know’ what is going on in Sagittarius A*,” Wielgus concludes.

The Atacama Large Millimeter/Submillimeter Observatory (ALMA), an international astronomy facility, is a collaborative partnership between ESO, the US National Science Foundation (NSF), Japan’s National Institutes of Natural Sciences (NINS) and the Republic of Chile. ALMA is funded by ESO on behalf of member countries, by the NSF in collaboration with the National Research Council of Canada (NRC) and the Ministry of Science and Technology (MOST), and by the NINS in collaboration with the Academia Sinica (AS) in Taiwan. I am receiving and Korea Astronomy and Space Science Institute (KASI). The construction and operation of ALMA will be led by ESO on behalf of the Member States. By the National Radio Astronomy Observatory (NRAO), managed by Associated Universities, Inc. (AUI), on behalf of North America. By the National Astronomical Observatory of Japan (NAOJ) on behalf of East Asia. The Joint ALMA Observatory (JAO) will provide unified leadership and management of ALMA’s construction, commissioning and operations.

The European Southern Observatory (ESO) enables scientists around the world to discover the secrets of the universe for the benefit of all. We design, build and operate world-class astronomical observatories on the ground to help astronomers tackle exciting problems and spread the fascination of astronomy, and foster international cooperation in astronomy. Founded in 1962 as an intergovernmental organization, ESO currently has 16 member states (Austria, Belgium, Czech Republic, Denmark, France, Finland, Germany, Ireland, Italy, Netherlands, Poland, Portugal, Spain, Sweden, Switzerland, and the United Kingdom), with host Chile and Australia as a strategic partner. ESO’s headquarters and its visitor center and planetarium, the ESO Supernova, is located near Munich, Germany, and the Atacama Desert in Chile is a wonderful place with unique conditions for observing the skies, and our telescopes. I am hosting. ESO operates his three observation sites, La Silla, Paranal, and Chajnantor. At Paranal, ESO operates the Very Large Telescope and its Very Large Telescope Interferometer, as well as his two research telescopes, VISTA and Visible Light VLT Survey Telescope, which operate in the infrared. ESO will also host and operate at Paranal the Cherenkov Telescope Array South, the world’s largest and most sensitive gamma-ray observatory. Together with international partners, ESO operates APEX and ALMA in Chajnantor. The two facilities observe the sky in the millimeter and submillimeter wave ranges. At Cerro Armazones near Paranal, they are building ESO’s Very Large Telescope, “the world’s largest eye for the sky.” From our office in Santiago, Chile, we support our business in Chile and work with Chilean partners and society.