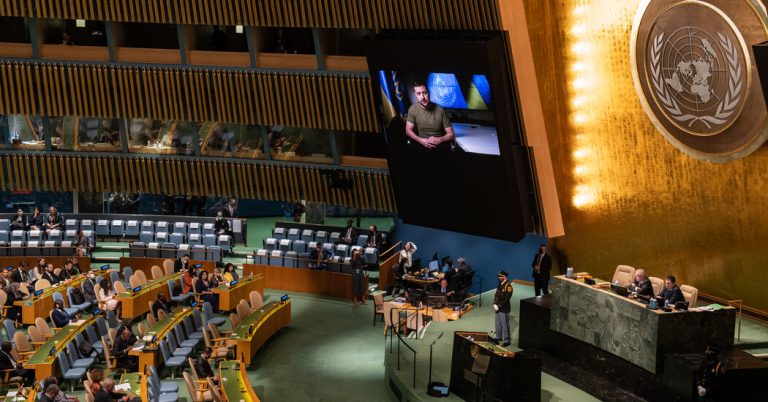 In his address to the United Nations General Assembly on Wednesday, President Biden criticized the Iranian and Chinese governments’ human rights records and vowed that the United States will always stand up for those rights.

In allusion to protests erupting in Iran over custodial death Masa Amini Biden told a 22-year-old woman who was arrested by the country’s morality police last week on suspicion of violating the dress code that the United States “stands with the brave citizens of Iran and the brave women. are demonstrating to ensure their own safety,” he said. basic rights. ”

And as negotiations to revive the 2015 Iran nuclear deal, abandoned by President Donald J. Trump, stalled, Biden said he would use force if necessary to prevent Iran from developing nuclear weapons. He tacitly threatened, but said he wanted to prevent conflict.

“We will not allow Iran to acquire nuclear weapons,” Biden said, adding that he “continues to believe that diplomacy is the best way to achieve this result.”

Earlier Wednesday, Iran’s president, Ebrahim Raisi, made his debut before the General Assembly and spoke in defiant terms that offered little hope of a new diplomatic breakthrough.

He criticized Israel as “a barbaric occupying power.” He held up a photo of Maj. Gen. Qasim Soleimani, the former commander of Iran’s powerful Revolutionary Guard Corps, who was assassinated by the US in Iraq. And, hinting at a nuclear deal, Iran wants to get something “fair and just” for them, he said.

The Biden administration sees Iran as its biggest challenge in the Middle East, but Mr. Biden has suggested he wants to spend less on diplomatic and military resources in the region to focus on China and Russia. is doing.

Biden mentioned China several times in his speech, first saying states must respect “freedom of navigation.” American officials use the term to describe the threat China’s military activities pose to the Asia-Pacific region. U.S. officials have warned of China’s growing military footprint in the South and East China Seas, Chinese naval and air force activities around Taiwan, and China’s growing security presence in the Pacific.

Mr. Biden said Wednesday that the U.S. does not want to escalate competition with China. “The United States will behave as a rational leader in dealing with changing geopolitical trends,” he said. “We don’t want confrontation. We don’t want a cold war.”

He said the United States would not ask other countries to choose between themselves and their competitors, but argued that Washington was “not shy about promoting” its vision of a free world.

Biden also said the United States remains “committed to a one-China policy.” The policy recognizes China’s position on Taiwan, but does not endorse it. However, he said the U.S. military would defend Taiwan in the event of an “unprecedented attack” by China.

Mr. Biden delved into criticism that Russia and China are undermining the widely agreed rules-based world order and called for reform of the UN Charter. This includes making the Security Council “more inclusive” by expanding its permanent membership. It is made up of Britain, China, France, Russia and the United States. US officials have backed the idea of ​​adding Germany, India and Japan to the board.

Moscow and Beijing have often vetoed resolutions supported by the other three permanent members of the Security Council and much of the international community. In his speech, Mr Biden said countries should refrain from vetoing the Security Council.