Washington Monument closed after being vandalized with obscenities, red paint 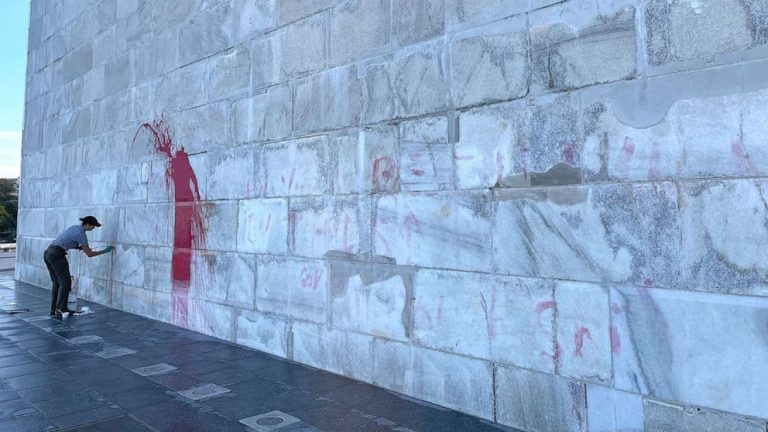 The Washington Monument was temporarily closed after a man vandalized a national landmark with profanity and red paint, police said.

The incident occurred on Tuesday night, when the foundation of the historic building was splattered with red paint and an obscene message was written on the side of the building.

The US Park Police identified the suspect as Sean Ray Deaton, 44, of Bloomington, Indiana, and charged him with trespassing, tampering and vandalism related to the incident. An investigation is ongoing, and the U.S. Park Police said there may be additional charges against Deaton.

It is unknown what the motive for the vandalism was, or if the message scrawled on the base of the monument was intended for someone in particular.

National Park Service conservationists are working to restore the monument. Conservation workers were removing the top layer of paint on Wednesday morning. The pigments that have soaked into the stone are treated with “multiple applications of cleaning agents,” he said.

“A week of sunshine will also help the monument return to its normal, impressive state,” the National Park Service said.

Authorities have not said how long the restoration process will take or how long the attraction will be open to the public.

Completed in 1884, the Washington Monument, at 555 feet tall, was the world’s tallest structure from 1884 to 1889, only to be overtaken by the Eiffel Tower in Paris. The obelisk is named after the first president of the United States and attracts over 600,000 visitors annually.

Beatrice Peterson of ABC News contributed to this report.