What we know about the Club Q shooting in Colorado Springs 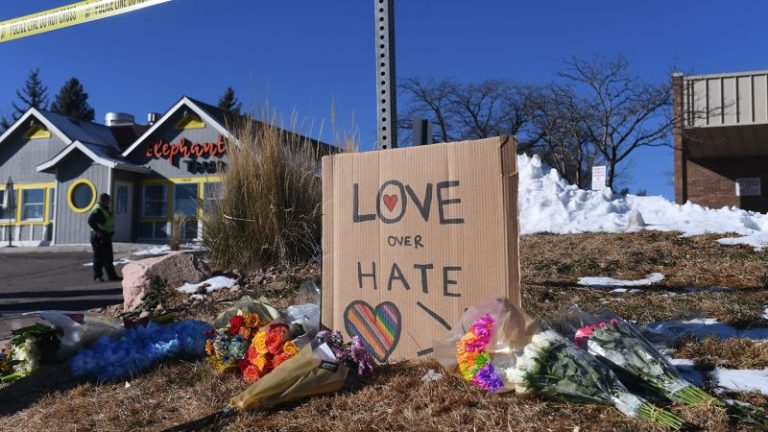 The suspect in the Club Q shooting has been identified as Anderson Lee Aldrich, according to Colorado Springs Police Chief Adrian Vazquez.

Vasquez said he opened fire as soon as he entered the club, and at least two people inside the club confronted him and fought him to prevent further violence.

“We are very grateful to them,” he said.

Police say Aldrich is being treated in hospital. Officers did not shoot him, police said.

Colorado has been home to some of the worst mass shootings in U.S. history, including the Columbine High School shooting in 1999. Last year, six people were killed in a shooting at a birthday party in Colorado Springs.

Here’s what we know about the deadly attack in Colorado Springs.

The violence lasted just a few minutes. Police said a large number of 911 calls were received at 11:56 p.m., police were dispatched at 11:57 p.m., officers arrived at midnight, and the suspect was detained at 12:02 a.m. said. A total of 39 patrol officers responded, according to police, and Fire Department Captain Mike Smaldino said 11 ambulances were headed to the scene.

Aldrich used a long rifle in the shooting and two firearms were found at the scene, Police Chief Vazquez said.

Joshua Thurman told CNN affiliate KOAA that he was dancing inside a club when he heard gunfire and saw a muzzle flash.

“I thought it was music, so I kept dancing,” he said. When he heard another gunshot, Thurman said he ran to the locker room to hide.

He said he heard more gunshots, people crying and windows shattering. When he came out, Thurman said, he saw a dead body lying on the ground, broken glass and blood.

Authorities initially said 18 were injured, but later adjusted the total to 25.

Police said they were investigating whether the attack was a hate crime and noted Club Q’s relationship with the LGBTQ community. The shooting came as the calendar changed to Transgender Remembrance Day on Sunday.

“Club Q is a safe place for LGBTQ citizens,” said Vasquez. “All citizens have the right to feel safe and secure in our cities and to move around our beautiful cities without fear of being harmed or mistreated.”

In a statement on social media, Club Q said it was “devastated by the senseless attack on our community” and added, “The swift response of our heroic customers to subduing the gunman and ending this hate attack.” Thank you for your response.

Two law enforcement sources confirmed that the date of birth and name of the suspect in the nightclub shooting matched the person arrested for the bomb threat the year before. Colorado Governor Jared Polis also told CNN he believes the two are the same person. What I’ve heard indicates it’s the same person,” Polis said.

Anderson Lee Aldrich was arrested in June 2021 after a confrontation at the Colorado Springs home where his mother lived, according to news releases from the El Paso County Sheriff’s Office and his mother’s former landlord at the time. it was done.

A video obtained by CNN shows Aldrich surrendering to law enforcement last year after making a bomb threat. Footage from the home’s owner’s ring door camera shows Aldrich exiting the house barefoot with his hands up and walking to the sheriff’s deputy.

In a June release, the sheriff’s deputy said it responded to reports that Aldrich’s mother was “threatening to harm her with homemade bombs, multiple weapons and ammunition.”

An agent called the suspect, but the suspect “refused to comply with the surrender order,” the press release said, and they evacuated their nearby home.

Hours after the initial police call, the Sheriff’s Crisis Negotiations Unit was able to evict Aldrich from the house, and he was arrested after walking out the front door. Authorities found no explosives in the house.

CNN’s attempts to reach out to Aldrich’s mother for comment were unsuccessful.

Club Q opened in 2002 and until recently was the only LGBTQ club in Colorado Springs.

The city is the second most populous in the state, with a population of just under half a million and has many military bases. It is the headquarters of Focus on the Family, a conservative Christian group that claims that homosexuality and same-sex marriage are sinful.

In a July 2020 interview with Colorado Springs Indy, Club Q owner Nic Grzecka said he and his business partners opened the club to ensure a “permanent” safe place in the city. said he did.

The venue also hosts events for people of all ages, including brunch, and plans for upcoming Thanksgiving events.

“I’m there every other week, if not every week. This space means the world to me. The energy, the people, the message. It’s a wonderful place that doesn’t deserve this tragedy,” Dykes told CNN on Sunday. “Something like an LGBT+ safe space shooting takes an incredible toll.There is disrespect, mistrust and pure shock. I don’t think so, and sometimes I do.”

“I am eternally grateful to the brave people who stopped the shooter who may have saved lives in the process, and to the first responders who responded swiftly to this horrific shooting,” he said. The state of Colorado joins the LGTBQ community and all those affected by this tragedy in joining our condolences.”

Police told CNN’s Jim Acosta that there are only two gay bars in Colorado Springs and Club Q is one of the main venues.

Both of Colorado’s two US Senators are Democrats. expressed condolences in a statement He said more should be done for the LGBTQ community.

Senator John Hickenlooper said, “LGBTQ lives must be protected from this hate.

Senator Michael Bennett said: “As we seek justice for this unimaginable act, more must be done to protect the LGBTQ community and to stand firm against all forms of discrimination and hatred. ‘ said.

President Joe Biden also issued a statement saying he was praying for the victims and their families.

“Although the motives for this attack are not yet clear, we do know that the LGBTQI+ community has been subjected to horrific hate violence in recent years. Gun violence continues to have a devastating and specific impact on LGBTQI+ communities across the country. and threats of violence are rising,” Biden said in a statement.